Wendt Gallery Annual Winter Exhibition 2009
January 15th - February 15th
Featuring work by Donato Giancola
An excerpt from Donato's website
"This year I have been graciously invited by Serina and Joseph Manqueros to participate in the 2009 Annual Winter Exhibition at the Wendt Gallery in Laguna Beach, California. I have spent the last few months of 2008 creating five new paintings to premiere at the show: "Progeny", "Autumn", "Perseverance", "Sandstorm" and "Venus Awakening". In addition to these new paintings, I will also be showing part of my "Water" triptych."

This is a cover for "To Sleep With Evil" the fourth novel in a series of reprints for Ravenloft by WotC. Jon Foster did the first three covers, so this meant two things, one I was very nervous and two I had a pre-established continuity of layout to work with. These covers are done in two pieces and then composited by the AD/Designer Matt Adelsperger.

Art Description:
Character: Margueritte dressed in a silken gown (actually crafted from human flesh) She is pregnant with an unholy, cursed, monstrous child. Though she has no proof of it, she just has a feeling that there is something wrong with the fetus
Background Panel description: The husband (and lord) has sworn an oath to eliminate all beauty in his lands and has begun to kill off the most beautiful woman. He does this by lopping off their heads and tying their neck's closed with ribbons and/or choker collars. So, lots of dead heads. It could be handled as a pile of them on the floor with the camera situated above and shooting directly down on them. 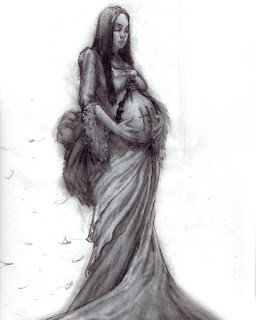 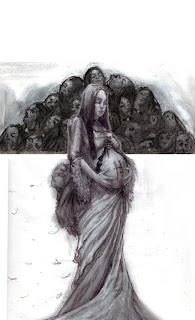 Matt wanted me to try turning Margueritte's head, as if she is looking back over her shoulder fearfully, and to make the heads more of a nondescript mass of heads rather than a pile 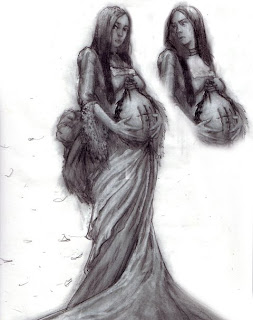 He picked the option on the right and I went to... 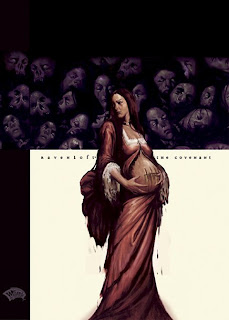 Inside the Artist's Studio part 4 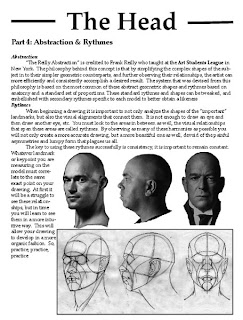