Shortly after getting married, in 2004, my wife and I went on a painting trip to Tuscany. If you ever get the chance to go, take it. The Italian country side is one of the most beautiful places I have ever seen. Here are two paintings I did while on this trip.

"The town of Levanto is the doorway to the Cinque Terre. The Cinque Terre (5 lands) is composed of 5 small villages: Monterosso, Vernazza, Manarola, Corniglia, Riomaggiore.The Cinque Terre is a National Park and Unesco World Heritage site."

There is a trail that leads through all five villages, along the vertical cliff face. I made it to the fourth before bad weather forced a hasty retreat.

Cinque Terre oil on canvas board 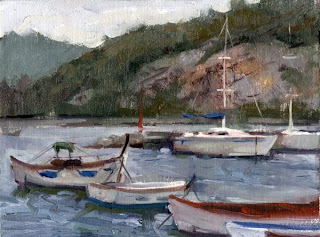 "Imagine a beautiful little Tuscan town protected by massively thick 16th-century walls, featuring some of Italy's finest medieval and Renaissance architecture, superb dining, antique markets, classical and rock music festivals, easy access to stunning nearby villas in the surrounding hills and with endless beaches less than half an hour away. Lucca is one of Tuscany's best-kept secrets."

All of this, and I painted a bike? 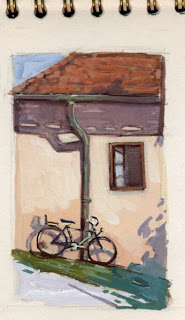 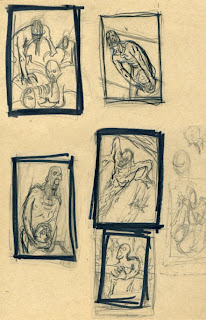 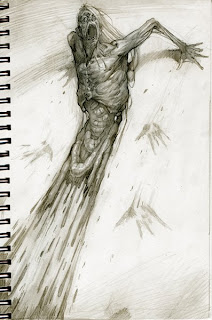 Reformated to fit cover and shadowed to guarantee PG13 approval 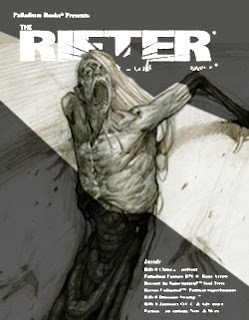 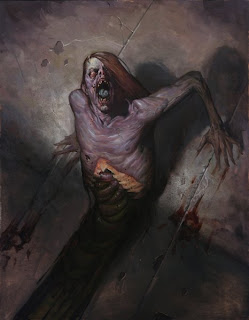 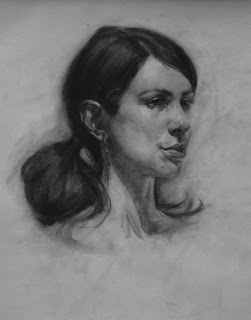 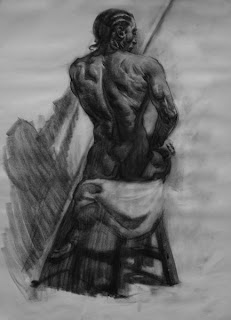 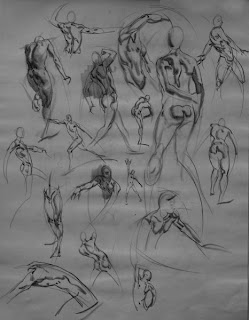 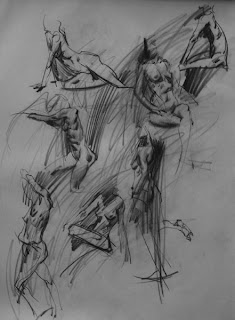 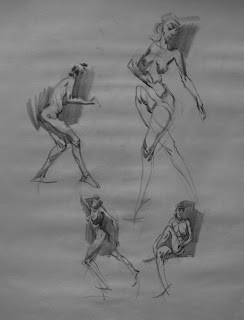 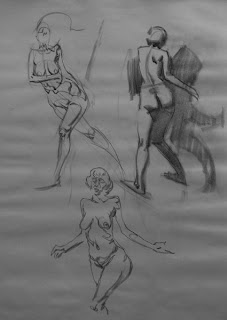 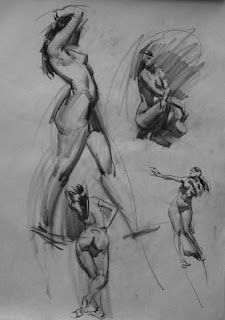 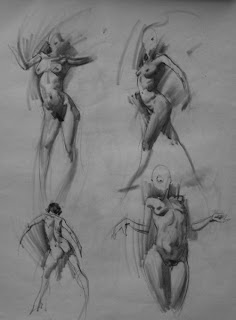 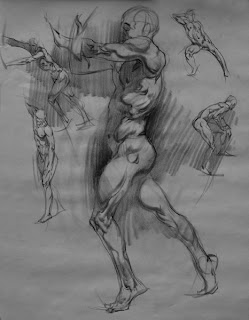 I would like to take the time to introduce everyone to some of my more advanced students. This month I would like you to meet Mike Hayes. You can see more of his work here 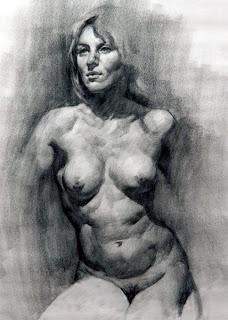 Mike Hayes was born in a small town in Mid-western Canada, moved to Montreal when he was five, then moved down to San Diego when he was Fifteen. Mike moved up to San Jose when he was Twenty to finish his degree then moved back at Twenty-three. He have been working as a professional illustrator for about 6 months now as well as working very part-time for his Father as a Bookkeeper. Mike says " I don't really have much in the way of free time, but when I am not painting I enjoy just hanging out with friends, playing pool, watching movies, hitting on women that are out of my league,reading novels, and occasionally indulging the nerdier side of my personality playing trading card or miniatures games.

1. What inspired you to become an artist/illustrator?

This is actually quite a long story, if anyone is interested, the full version is on my website (www.artofmike.com) The short version goes something like this though: I had planned on becoming a software engineer, which led to web programming, then web graphics, then 3d modelling, then traditional sculpture and finally to traditional drawing and painting. From there, specializing in illustration was a natural fit for me given my tastes and desire to work on all aspects of a project, from start to finish.

2. What first drew you to study at Watts Atelier? 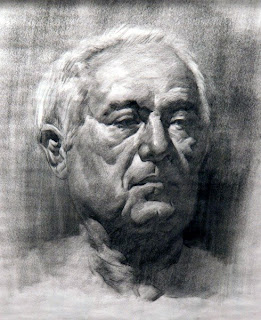 I had heard good things about the Atelier through the internet and a few friends. Initially I had only planned to stay for about a year, I had only really seen it as a place to hang out and work on my drawing a bit before I went off to get my masters degree. Within a few weeks of attending Watts I began to question that plan, by the end of the first quarter I was completely sold on the place and decided to stick around indefinetly. That was a bit more than 3 years ago, and was, without a doubt, one of the best decisions of my life.

3. What is you favorite genre/subject to illustrate?

While I enjoy painting just about anything in or related to the fantasy genre, I would say my favorite sub-genre would be mythology, specifically myths and legends from cultures that haven't been depicted as often as the Greeks and Romans. For me this is the right balance of making a painting historically and realistically grounded, while at the same time letting my imagination run free. As far as subject matter is concerned, you can take one look at my work and tell that I have a soft spot for painting beautiful women. I have been told I will grow out of this eventually, I sure as hell hope not.

4. What is your dream job/project to work on?

This is a bit of a tough question to answer, I have heard from many people in many different art related industries that the "dream jobs" are not usually all they are cracked up to be. I could give you a few stock answers such as working on my own book, doing a cover for [x] author or painting [x] character. I think though, when it comes down to it, my dream job is simply one that I really enjoy working on and leaves me with a painting I am truly proud of. I have already had a few of those and I hope to have a few more.

5. Which of your artistic achievments are you most proud of?

During my senior year of college when I decided I was going to abandon a potential career in 3d modeling to pursue traditional painting instead, I had a few professors and classmates tell me I was crazy and that I wouldn't make it. One professor in particular was especially zealous in trying to talk me out of it, going so far as to spend half an hour talking to my parents about his views on my future. This may sound a little arrogant and spiteful,(and I am not sure if qualify as having "made it" yet) but the achievment I am most proud of is working my ass off and proving him wrong.

6. What is your education background?

I finished high school in 2000, studied at a local community college for 2 years, graduated with honors from Cogswell Polytechnical College in 2005. I studied full time at Watts Atelier for 3 years and have recently moved down to part time status and plan to stay there indefinetely.


7. What do you feel has been most valuable to you in getting to where you are as a professional 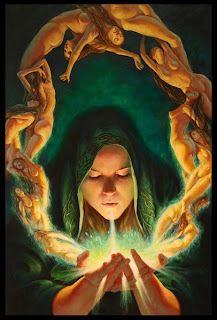 There is absolutely no way I will be able to narrow this down to a single answer, I think I could write a book on this. In no particular order: Hard work, smart work, patience, tenacity/persistance, excellent instruction/mentors, very supportive parents, great environment at the Atelier, friends who were willing to model for me, caffiene, the internet, illustrators/art directors who critiqued my work, luck... I could probably go on all day but you get the idea.

8. Where do you see yourself in five years?

Doing the same thing I am doing now, only I hope to be better at it, get paid more and work on higher-profile gigs. If circumstances permit,
I would also like to teach part-time in some way, shape or form.

9. What are your greatest strengths and weaknesses?

For strengths: Patience, persistance and strong work ethic. I am simply not the type to half-ass things, whether it be my education or career in general or repainting a nose ten times until it is right. I have never seen myself as naturally "talented" but I think these other attributes have helped make up for that. As far as specifics go, I like to think that I am pretty good at faces/portraits.

For weaknesses. Here is another one I could write a book on... In the interest of not looking completely incompetant, I will try and narrow it down.
Speed , or lack thereof. I am a slow, methodical draftsman and painter. Thus, at the moment, I can't take as much work as I would like to, and I have to be really careful about taking work with tight deadlines. I am also a bit overly reliant on photoreference, I can make do without, but I don't like to and it slows me down quite a bit. For specifics: thumbs (the finger, not thumbnail sketches), I couldn't tell you why, but I *&%*ing hate those things.

10. What is your favorite book?

Without a doubt, "The Song of Fire and Ice" series by George R.R. Martin. Other notables are The Lord of the Rings, anything by Morgan Llywelyn and a newfound favorite of mine: Bernard Cornwell.
Posted by E.M. Gist at 5:14 PM 1 comments

Here is one from the archives. This was my first assignment for Magic: the gathering.
this was my description:

ART DESCRIPTION: Color: Black Location: Ice Age Setting Action: Invent a horror creature that appears from the edge of oblivion. What it looks like is up to you. It should be at least 10 feet long/tall. Focus: the horror Mood: Oblivion is worse than death.
and this is the incredibly amateur sketch of an incredibly lame idea. I credit it to the stress of my first high-profile gig, but in truth I just had no idea what I was doing (as opposed to now when I a have very little idea of what I am doing) 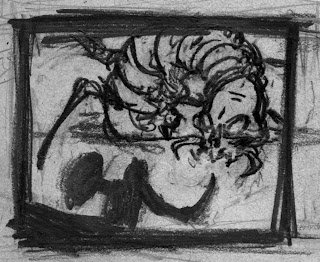 I no longer have the email, but the art directors response was basically What the hell?! I hired you because you create creepy shit, and you give me a badly drawn "Starship Troopers" reject!!!
I am paraphrasing here.

So back to the drawing board I went, and came up with this. 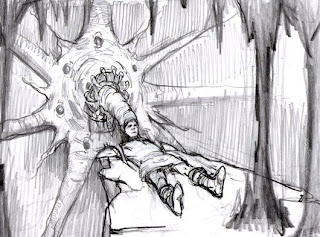 He was much happier, so we got down to brass tacks.
Nice, but give him a body, right now it is too abstract.
Was the gist of his comments

So I gave him this 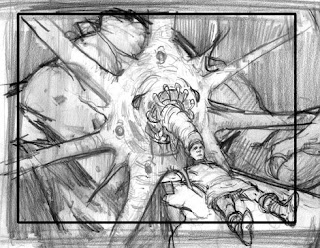 Good, but get rid of the cave man, this reads too much like an action, and not enough like a character.
He says, so I give him this 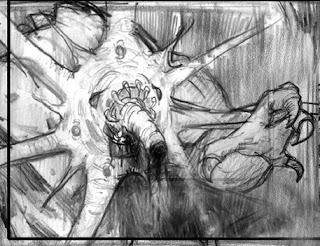 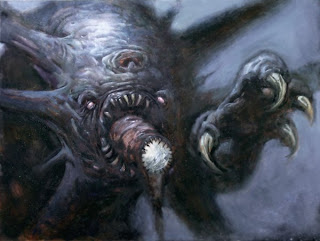 So that was my first adventure into MTG
Posted by E.M. Gist at 7:00 AM 5 comments 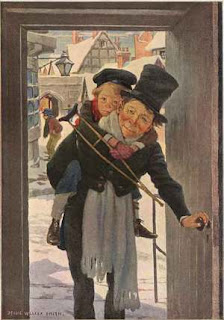 Scenes of the Season: Paintings and Illustrations from the Collection
November 28, 2008 - January 11, 2009
Winslow Homer, Maxfield Parrish, Jessie Willcox Smith, and N.C. Wyeth (plus the obligitory "and more") at the Brandywine River Museum... "hrmm"... could be okay, if you're into that sort of thing.

I take it as a source of pride when, I can satisfy myself, the AD and the author with an illustration, especially when it is a writer of the caliber of a Hal Duncan.

Here is a link to an interview with Mr. Duncan on BookSpot Beat

and the pertinent excerpt 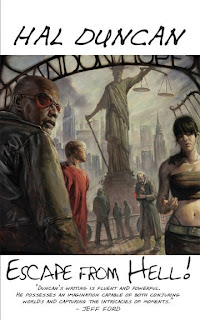 "Jay Tomio - The cover to Escape From Hell is sweet as well. . .hell. Did you have any input or is that just Chris Roberson handling business?

Hal Duncan - Chris put the artist, Erik Gist, in touch with me, and we threw a couple of ideas back and forth based on the synopsis – because the novella wasn’t quite finished at that point. There’s a scene later on that we both thought would have looked really cool — you’d have had the heroes all standing there, tooled-up and facing out at the reader; it would have had a nice “bring it on, motherfuckers” vibe – but one feature would have been a bit of a spoiler. In the end we both preferred the option Erik ran with, which is taken straight from the prologue with just a tiny bit of artistic license used to bring Lady Justice into shot. If I remember right, Erik suggested it in a really early email, and described it almost exactly the way that I’d always visualised the scene. So I was totally over-the-moon that we were on the same wavelength.

Really my input came down to “yes, that sounds fucking awesome,” and “oh, but yeah, this Hell is cold and grey rather than fiery and red”. I mean, the traditional imagery of Hell-as-inferno _almost_ got in the way for a whole millisecond – most images of Hell are all black and red after all, thick crimson skies, darkness and flames – but Erik had actually picked up on the ashen wasteland feel I was going for, so it was just a matter of confirming that his first instinct was correct. The colour palette he used for it is perfect, I think, and I love the little touches of red on the key characters – Seven’s shades, Belle’s rosary and so on."

Inside The Artist's Studio part 3 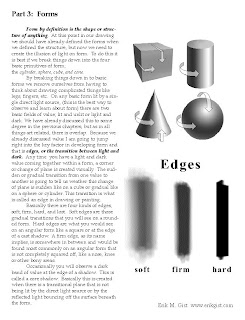 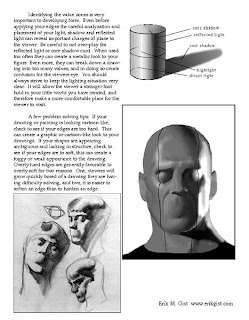