This is the third cover for a four book Forgotten Realms series called The Wilds
Description:
The Plaguewrought Lands—This area is about as close to the original Spellplague as anyone is going to get. “The mote had found an island of calm in the turbulent sea of chaos. Over the edge, Duvan could see boiling destruction below. Explosions of molten rock and flickers of crisp blue magic punctuated the larger tableau of swirling plaguestorm. Pinpoints of light far far below what could be ground level shone like stars in an upside down world.” If you were to take away the spellplague remnants and the weird landscape elements, you’d have scrubland left. 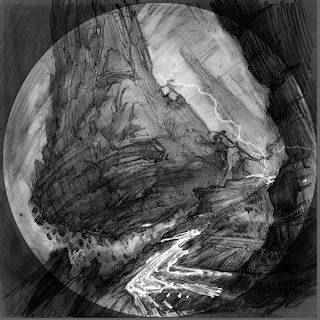 Art Direction:
"Got it, my man. This might be the strongest one so far. It has weight, might, and really says that something is changing the geography here. Just sent it to the editor and will get back to you tomorrow.
followed by
"OK, editor reminded me that there should only be 2 characters Duvan and Slanya.
Also, I was worried that we might be doing the same painting as Restless Shore. We’ve moved the cameras in quite a bit, but outside of that its pretty similar. And the art order calls for a dark blue and purple sky. Yikes.Could you rough out something more in line with option 2 from the art order?" 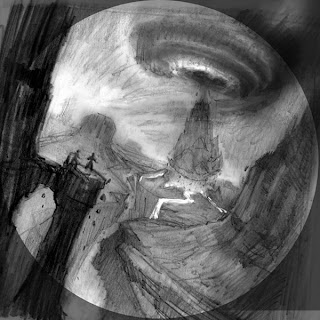 Art Direction:
"Ah-ha this has much more distinction from the previous book. But wasn’t able to show it to the editor today. I had a couple emergency projects to work on. I’ll be able to get you feedback from her on Monday."
followed by
"Starting with sketch 2, let’s remove the large earthmote and create a bunch of smaller ones. The could be shooting around like comets. Following the same path as the swirling blue-fire storm above. And she suggested that the ground below could have rocks and peaks growing up from below.And to get away from a blue/purple. Similar color scheme, push towards dark blue and maybe teal."

Final Painting 80% done, I will post the complete finished painting after the book hits the stands 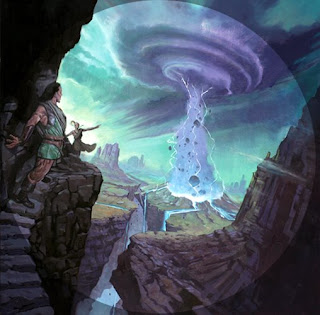 Art Direction
"Oooooh… I like this color palette better. That’s my man! Let me slam ithis into the layout and see if the editor has anything to say. Prolly just, “Looks great!” and I second that." 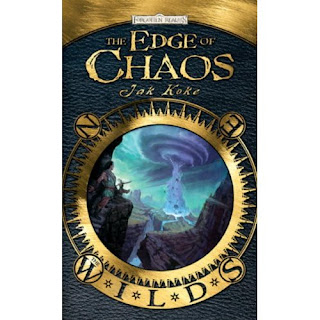 Thanks Joshua, See you SDCC if not sooner

hey Erik, about how many hours did you put into the whole process?

arnie-
almost impossible to say due to how long ago it was and me being of a forgetful mind. This I can say, each sketch I did in an evening (after frustration filled days of mulling over ideas in my head and on scrap paper). The painting was probably a total of 60-80 hours ( just a guess).