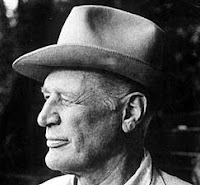 Harvey Dunn is one of the most influential illustrators in American history. He often sacrificed craft and technique for narrative and visceral impact. Trained by Howard Pyle, he passed many of his teachings and philosophies on to his students such as Dean Cornwell, Saul Tepper, Meade Schaeffer, and Harold von Schmidt. He was known for quotes such as " There are ten thousand people in the United States who can draw to beat the band. You never heard of them and you never will. They have thoroughly mastered their craft. And that is all they have...their craft." According to Dean Cornwell many of these proclamations were for the inspirational affect on the students.

Dunn spent the bulk of his teaching career in New York at the Grand Central School of Art and The Art Students League, but began his life long love afair with teaching in 1915 at a school he founded, the Leonia School of Illustration. It was here that he taught Dean Cornwell, who once said of Dunn's teachings "I gratefully look back on the time when I was privileged to sit at Harvey Dunn's feet . . . [he] taught art and illustration as one. He taught it as a religion - or awfully close to such." 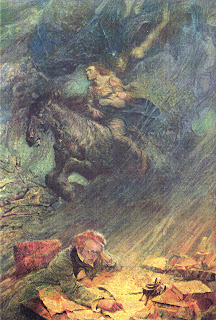 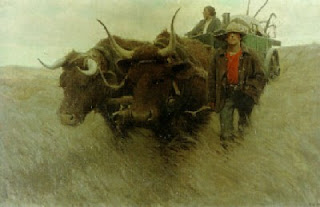 Here are two interesting reads
Harvey Dunn's Class Notes by Charles J. Andres
An Evening in the Classroom
Posted by E.M. Gist at 6:00 AM

definitely one of the best artists that influenced me, not through his art, but from his lessons.
here is a link to “an evening in the classroom”
http://homepage.mac.com/georgepratt/iblog/B44581127/C1911975396/E754290273/Media/H.Dunn-EveningClassroom.pdf