A onetime student of mine, Daniel Xiao, matriculated to Art Center last year. Although I only taught Daniel for about a year, I am very proud to announce that he has recently been accepted as a summer intern at Pixar. In honor of this I thought it would be fun to do a two part interview with Daniel chronicling his experiences going into his internship, and then again on completion.
Good luck Dan! 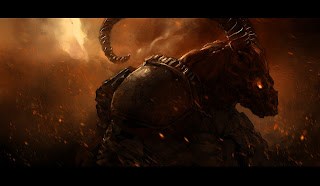 Daniel Xiao was born in Stony Brook, New York and grew up in San Diego, California. He studied classical figure drawing at the Watts Atelier of the Arts in Encinitas while finishing up his senior year in high school and was subsequently accepted into the Entertainment Design program at Art Center College of Design. He recently accepted a position at Pixar Animation Studios as a matte painting intern.

1)What initially inspired you to pursue art as a profession?

There were a few things that led up to it. Like a lot of other people, I've been drawing since I was a kid. When it came time to go to high school, I was lucky enough to get to choose between one that had already been established with long history of academics and sports, and one that had just been built that would have a focus on arts and technology and a dedicated extracurricular art program. I chose the artsy school of course, got into the art program, and then slowly started meeting people that were somehow doing this thing for a living, up until being introduced to the Watts Atelier in Encinitas. I visited the atelier and had a long conversation with Jeff Watts about the possibilities of having a career in art. After that I'd say I was pretty much convinced.

2)What is your educational/training background?

I studied figure drawing for one solid year at the Watts Atelier and industrial design for about six months at the Art Center College of Design.

3)What education/experience/attribute do you feel has best prepared/served for getting your internship?

I'd say most of it was luck. I never actually set out to get an internship at any particular company and with Pixar it seems to me that I just happened to have the skill set they were looking for at the time they wanted an intern. I believe what Pixar was looking for at least was a genuine passion for doing what we do. I think a lot of art students take all of the right classes and go through all of the correct motions and never bother to go and find out exactly what it is that really motivates them. Having that passion is in my opinion the key to succeeding at pretty much anything. I've never taken any courses on digital painting or environment design but it doesn't matter because I just like doing it.

4)What do you feel are your strengths and weaknesses going into your internship?

Hmm... I'd probably say my observational drawing skills are my strengths and design skills are my weaknesses, this just based on the amount of experience I've had in both areas, respectively.

5)Which skills are you hoping most to improve?

I'd really like to do more life painting if possible and perhaps learn some 3d.

6)What is your dream job/project?

Not sure about the dream job, but if there was any project I wish I could have worked on it's Star Wars Episode III. Despite what anyone thinks about the movie, the art department on that project was simply out of this world... I don't know if there's anyone but Lucas who's going to have the inclination (or money) to assemble a team like that ever again.

7)At this point which artistic achievment are you most proud of?

Getting this internship of course!

8)If you could go back in time 5 years what advice would you give yourself?

Do more traveling and get into photography.

9)Where do you see yourself in 5 years?

Hopefully I'll be working somewhere in the game/movie industry.

10)What is your favorite cartoon?