#1 Alien
Everything about this movie is brilliant. The movie poster, the creature and tech design, the acting, and of course the brilliant direction. One of the few perfect films out there. 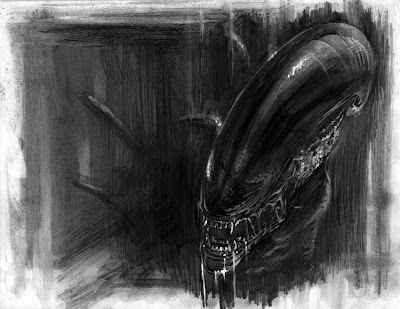 Hehe, same here!
And that film was out when I was in middle school and the memory of watching it on VHS for the first time has stuck in my heart and soul ever since.

Called it also! I'm anxious to see what they do with the prequal. Especially with Ridley Scott on board.

I'm pretty sure there are two prequals on the go, Lucas.. which makes it all the more interesting.
Let's pray they don't wreck it :)

The film was brilliant foremost as a story - under what circumstances might humans encounter a hostile alien species, and what would it feel like to experience it? This it answers expertly, through seven different people with distinct personality types who all react in their own way, through anger, fear, discipline, disbelief, curiosity, etc. The setting is surreal, and fills you with wonder. The year could be 2020 AD or 30,000AD. You don't know and it doesn't matter - the dated Hawaian shirt and other clothes could just be some vintage momentos, mixed in with the official uniforms. You don't know how far man has traveled, or how much he's explored, colonised, etc. And the hostile alien has an animal intelligence, which I think is more likely than a hostile alien civilization. It also presents the viewers with a mysterious, wrecked, alien spacecraft, which would've made for an excellent exlploratory sequal, if the creators had a clue. Too bad all the subsequent films were trash.

The trailer is also great!

I do not have my hopes up for the prequels, but we shall see. The fact that he want to do it 3d and is asking for a huge budget tells me the moodiness that made the original so effective is going to be absent.