Scene Suggestion:
1- She could be in conflict/confronted with a Dolgaunt.
This would resemble a snake fight. Boa versus and anaconda. I would prefer the Dolgaunt being positioned behind her. Or at least in manner that we show its haunting face. Maybe got the drop on her. But she’s not really scared. Retaliating. Her whip moves on its own. Imagine its composed of its own musculature. Its could be attempting to loose the tentacles wrapped around Lirra or can be strangling the attacker. Play around.

2- Contact with the portal
Portal positioned on the ground in front of Lirra. Those hands are reaching thru and have gotten entangled by her whip. It could be unclear as to who’s holding who.
Or go more thematic. Let’s say the portal is our ground. Giant sized hands are reaching up to ensnare her. The hands could either be aggressively grappling her. Struggle ensues. Or, they could be a pretty passive force of evil. Like a dais that she stands upon. Cupped her base. Lirra emoting something of an omnipotent air. 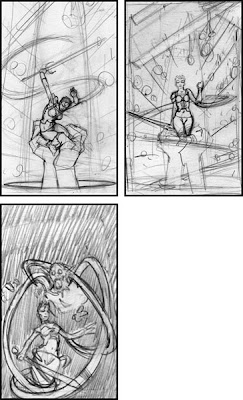 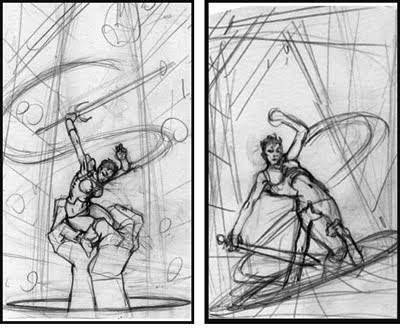 The AD had this to say

Maybe we should lose the sword. Or really de-emphasize it. Her most unique feature is that bio-whip that’s attached to her body.

I’m way more into the giant hands approach. Its got more concept than 2 tangling foes. So, we should just abandon that idea. Editor agrees.

I think the hands should be less “squeezie” strong and more like long, sharp, and menacing (Daelkyr hands). More like that passive force of evil I suggested. A venus flytrap before it snaps shut. A quiet, still, danger. More potentially energy than kinetic.

Other things could be coming out of the portal, too. Like smaller tentacles writhing around the giant hands. Like exposed veins.

And give it the Gist Creep-Factor.

My second pass at thumnails 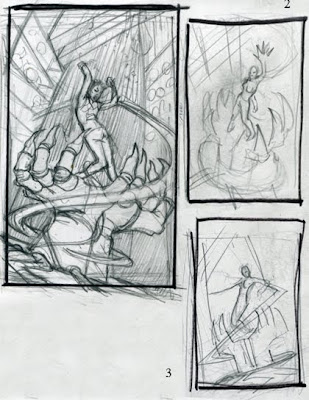 He then had this to say

#2 is firing on all cylinders! Dynamic angle, Lirra’s pose is right on, and I like how the hands feel a little statuesque. Plus we get to look down into that portal. Go ahead and work up something tighter based on that sketch and then we’ll see how well it fits the layout.

So I moved on to the final sketch 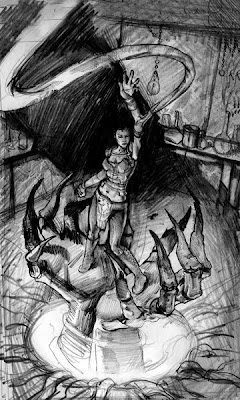 and his comments were this

We have some costume changes. Karnath is a very cold place. So, outside of her whip-grafted arm, she’s going to need a bit more coverage overall. Think heavy metal, russian military.

"Start with a white shirt underneath the green vest. It can be well worn. Ripped and dirty. Definitely ripped where her tentacle joins. Still pretty tight so we don’t wreck her silhouette. Boots- black and line with dark fur. Leggings- Yup, dark. Could have piping running up the sides. Karnath Cod Piece- it can be removed or stay where its at or have 2 of these. One on each hip instead. That might give the feeling of a gun holster. That’s pretty military. Upper body- How about some heavy black gauntlets? She could have all the other stuff we talked about. Fur lined shoulder pads. High collar. Short cape." The portal leads to the plane of Xoriat. Key color is a pale/desaturated blue. Described as stack of translucent parchment. Inhabitants exist on multiple layer simulataneously. Free-floating rivers of milk-white liquid. Rains of blue globes that burst into horse-size ticks/insects. Yikes. Hope this helps more than hinders. But to distill it down. Pale blue and hints at these layers of parchment or rain beyond the hands wrists.

Here was my costume redesign 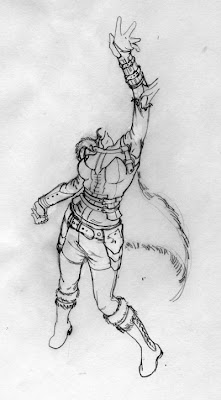 Yes, we’re good with that Erik! Officially in the biz. I really appreciate the extra work you put in.


So onto the final piece 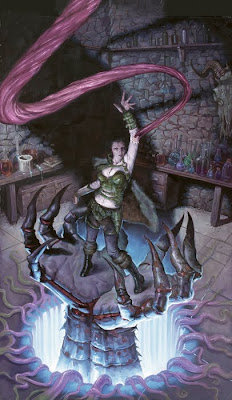 Very cool and insightful post. Nice Thumbnails. Thank you for posting feedback from the AD too.

Rayford- I am glad you found it helpful