A 2008/2007 Hugo Award nominee, 2007 Chesley Award nominee and 2006 World Fantasy Award nominee, Lou Anders is the editorial director of Prometheus Books' science fiction imprint Pyr, as well as the anthologies Fast Forward 2 (Pyr, October 2008), Sideways in Crime (Solaris, June 2008), Fast Forward 1(Pyr, February 2007), FutureShocks (Roc, January 2006), Projections: Science Fiction in Literature & Film (MonkeyBrain, December 2004), Live Without a Net (Roc, 2003), and Outside the Box (Wildside Press, 2001). In 2000, he served as the Executive Editor of Bookface.com , and before that he worked as the Los Angeles Liaison for Titan Publishing Group. He is the author of The Making of Star Trek: First Contact (Titan Books, 1996), and has published over 500 articles in such magazines as The Believer, Publishers Weekly, Dreamwatch, Star Trek Monthly, Star Wars Monthly, Babylon 5 Magazine, Sci Fi Universe, Doctor Who Magazine, and Manga Max. His articles and stories have been translated into Danish, Greek, German, Italian and French, and have appeared online at SFSite.com, RevolutionSF.com and InfinityPlus.co.uk.

I first met Lou, along with John Picacio at Comic-Con in 2005, and again in 2006 at World Con where I discovered he is one of the best pitch men I have ever seen. He is a very knowledgeable and entertaining guy, which definitely makes for a good interview.

1:What education/experience/attribute do you feel has best prepared/served you for your job as an Art Director?
A lifetime spent reading comic books? Collecting endless Boris Vallejo and Roger Dean art books as a kid? This is a hard question to answer, because I came to art direction backwards from editorial, and I came to editorial from left field, having started out as a journalist and screenwriter in LA. My sensibilities may be more cinematic as a result. But I am indebted to illustrator John Picacio and Tor art director Irene Gallo for their advice. And to Jaqueline Cooke, Nicole Sommer-Lecht and Grace Conti-Zilsberger in the Prometheus art department for their talent and for putting up with me.

2:What project, that you have worked on, are you most proud of (as a writer, A.D., or editor or all of the above)?
It's hard to pick favorites among your children, let alone when we’re talking children from different households. But as an A.D., I'll say that the hardcovers of Kay Kenyon's books in her Entire and the Rose series (so far: Bright of the Sky, A World Too Near, and the forthcoming City 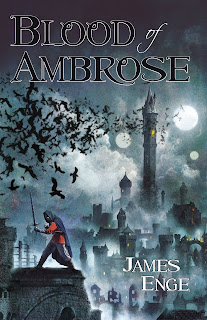 Without End) are just absolutely gorgeous. Covers by Stephan Martiniere and design by Jacqueline Cooke. As an editor, my recent anthology, Fast Forward 2, pretty much does and says everything about science fiction and its importance I've ever wanted to say. The John Picacio cover is amazing, and it evolved across many, many hours of conversation between John and myself about the need of SF to engage the world. But the project I’m most proud of is always the one I’m working on at the time (at this very moment, that’s James Enge’s forthcoming Blood of Ambrose, cover art (a WIP preview to the left) by Dominic Harman, layout by Jaqueline Cooke, Interior Illustrations by Chuck Lukacs, Interior layout by Bruce Carle

3:Do you find it a hindrance or a benefit to wear many hats (writer, A.D., editor, etc.)
I love it, because I am involved in every aspect of a book’s production, from selecting the manuscript and working with the author, to selecting the cover artist and working with them. Because of this, it’s possible that I know the manuscript in a more intimate way and am more personally invested in it than most art directors would be able to, given the (mostly time) constraints of their jobs.

4: What is your dream job/project?
I'm doing it. Failing being the editorial director at Pyr, I have (pipe) dreams of some exceedingly well-funded animation studio opening up in Shanghai and hiring me to be the head honcho in charge of adapting English-language science fiction and fantasy novels for the big and small screen, to be dubbed into every possible language. I often despair at the intelligence/complexity gap between literary and filmic SF, but I think animation is a perfect vehicle for bringing works like John Meaney's brilliant Nulapeiron Sequence (Paradox, Context, Resolution) to life, and it would be a dream come true to have a hand in that.

5:Beyond technical ability, what characteristics do look for in an illustration portfolio?
Range. I see so many portfolios that are 20 or 50 examples of the same thing, which tells me that the artist would filter my book through his/her own narrow interests, rather than bring their craft to bear on the specific needs of the individual project itself.

Personality. Is the illustrator following hi/her own path or falling in line with someone else’s direction? I see a lot of work that reminds me of Stephan Martiniere and Sparth – too absolutely stunning artists – but since I work with both of these guys, why would I go to one of their imitators when I can go to the source?

6:On a scale of 1 to 10, how much does an illustrator having a degree matter to you?
Zero. I’ve never looked and never known whether any of the artists I’ve approached have degrees. I know John Picacio, one of my favorite artists in the business, has a degree, but it’s in architecture. I believe Todd Lockwood started out working towards an art degree but dropped out for the same reason many genre writers drop out of writing programs. I could be misremembering though – which tells you how important a degree is to me. Final product is what counts, not how it got there.

7:You meet an illustrator at a convention, what do you look for in the artist as a person?
Professionalism, above all else. But, as in so many things, you want to be able to work with this person over long periods of time, hopefully over many projects. So you want to be able to get along, to enjoy the time, and to have trust between you. Funny, put that way it sounds like dating.

8:What first attracts your eye to an illustration (as an A.D. as well as a fan).
Personality. Also, it’s just my own quirk, but too much darkness and dismemberment in a portfolio turns me off. It could be that I associate it with immaturity – that whole high school heavy metal album impulse – but that might not be a fair characterization, as some artists I really admire (Caniglia, John Jude Palencar) do some lovely work in this arena. But it may also be that I’m viewing it with at least one editorial eye, and my most commercially successful books tend to be those that are exciting, fun, adventurous, etc… so I’m looking for work suitable for those sorts of novels.

9:How/where do you meet/hire most of the illustrators you work with?
It varies. I hate to disappoint, but almost never have I hired someone who approached me unsolicited in email. I tend to see works that speak to me on other book covers and pay attention to who the illustrators are. Other art directors make recommendations and put me in touch with artists. I met John Picacio in 2001 at a convention, when writer Graham Joyce introduced us. I believe Irene Gallo (Tor’s art director) put me in touch with Stephan Martiniere and Dan Dos Santos. Picacio introduced me to Caniglia, Bob Eggleton, Dave Seeley, Todd Lockwood and Dominic Harman. I engaged Chris McGrath after his agent approached me on another client’s behalf. Recently, I’ve begun to work with Benjamin Carre, after Mark Newton – and editor at Solaris but an author with a book forthcoming from Tor in the UK – put him on my radar. I met Dave Palumbo at a convention. I also follow Irene Gallo’s blog, Gorilla Artfare, Conceptart.org and (now) ConceptShips.org. (Interesting, I’ve posted compliments on artists’ works on some of these art showcase blog sites, but not once have any of them followed me back to see if I was interested in them professionally. Hmmm.) But looking at all this, it seems like the best way to get on my radar is to befriend John Picacio, doesn’t it?

10: How do you most like to be approached by a new illustrator (portfolio review, referral, mailer, etc.)
Despite the above, email me a link to an online portfolio. Don’t include jpg attachments, I won’t open them. It’s best if the website doesn’t have a lot of bells and whistles (no Flash, please) and just has a quickly accessible, easily navigable online portfolio.

11:If you could give one piece of advice to aspiring Art Directors and/or illustrators what would it be?
The best piece of advice I can give is the best advice ever given me. The very wise Jacob Weisman of Tachyon Publications said, You should never judge an artist by the best piece in his/her portfolio. You should judge them by their worst, because if that’s what they hand in, you’re going to have to live with it. I think this is tremendous advice for art directors. For illustrators, I suppose it means you should identify the worst piece of art in your portfolio and get rid of it! In all seriousness, I see too many portfolios that include everything going back to college, too many roughs and early works. A portfolio should reflect where you are now, not where you were five or ten years ago. Best foot forward, and only that foot!

12:What is your favorite cartoon?
That would be a tie between Danger Mouse and Batman: The Animated Series. I have a soft spot for The Maxx too. Ghost in the Shell is of course seminal. And everyone should see Serial Experiments Lain.
Posted by E.M. Gist at 9:20 AM